I’ve been meaning to write a quick post about the RSGB Convention for weeks but other things got in the way, this year it moved into central Milton Keynes at the Kent Park Conference Centre, however instead of staying at the venue a few of us opted to stay at the Hilton down the road as it was cheaper.

Thankfully the move seems a good choice, the lecture rooms were bigger, the internet worked and there was at least Three UK mobile coverage so I could keep an eye on business stuff while away, unlike previous years I was free from giving any official talks so managed to attend a larger number of the DXpedition and technical talks which was nice.

I did however do a demo of Cloudlog in the Software Developers forum which was interesting and also streamed online via Youtube which is a first for this event I believe. 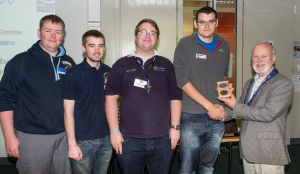 Sunday saw the presentation of awards and for a change this year we had one to collect being the 2013 RSGB IOTA Multi-Op Expedition Trophy our thoughts that we made major improvements in our operating style & setup and looks like we put in a good effort for 2014 as well. 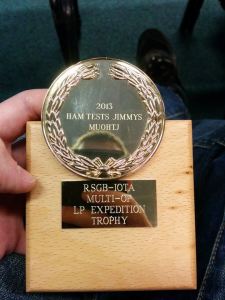